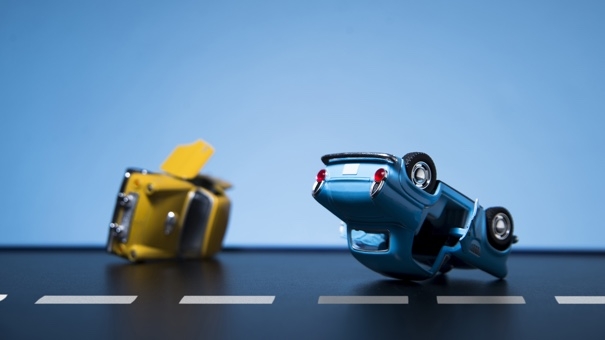 [Editor’s Note: This is another episode in Max Wong’s journey to find an extra $31,000 this year. Read the whole series here.]

Some stereotypes are true. People in Los Angeles suck at driving in the rain.

Last week, Mr. Spendypants and I were driving down the center lane of the 110 Freeway. The road ahead was a multicar accident scene. Blocking the left hand lane was a smashed car facing oncoming traffic, its windows completely blocked by air bags. Blocking the right hand lane was not one, but two separate pileups.

As we approached the accidents, we were struck from behind. The driver of the car that hit us had swerved to avoid crashing into the stopped vehicle in the left lane and plowed into our car, instead. The impact of the crash sent us skidding toward the stopped vehicles in the right-hand lane. If the initial impact wasn’t bad enough, the driver who rear-ended us tried to pull out of his skid only to drive into the side of our car, instead.

My first thought as we finally came to a stop on the wet pavement: Why did this have to happen to our nice car and not the clunker that I want to part out for cash?

Karina, our 1993 Volvo 240 station wagon, did her job. We drove away from the accident without a scratch. Unfortunately, Karina didn’t fare as well. The accident had smashed a rear door and quarter panel, and ripped off molding, a brake light, and a bumper cover.

The next morning we drove Karina over to our Swedish mechanic who put her up on the lift. Miraculously, she had not sustained any mechanical damage from the accident, just body damage. She is in perfect driving condition.

Even with this slightly good news, I knew at this point that Karina was totaled. Car insurance generally works off a very easy algorithm: If the cost of repair is more than 75% of the car’s value, that car is declared a total loss even if the car is in perfect working order.

Luckily, the driver of the car that hit us is insured (by Progressive). We had their adjuster give us an appraisal and got a second appraisal (and opinion) from State Farm, Mr. Spendypants’ car insurance. Both companies called Karina a total loss. This means that instead of paying to fix her, the insurance company would cash us out on Karina’s value and we’d drive home in a damaged car with a check in our pocket.

By the way, we were totally shocked that Karina had retained so much value. We’d purchased her in 2012 for $3,500. We were anticipating that they insurance companies would give us $1,000 and we’d be stuck paying out of pocket to repair her.

Both insurance companies offered to buy Karina from us for scrap. Progressive valued Karina at $119 as scrap, and State Farm offered us a princely sum of $75 to take our totaled car off our hands. While all insurance companies offer to buy totaled cars — as a convenience to the customer — it should be noted that Karina’s used parts are worth around $15,000. The rear door that we will have to replace on Karina sells for $450. And that’s just for the exterior metal panel, not the interior of the door!

I have no idea why more people don’t understand what a total money-loser this is.

The loss of almost $15,000 in parts value is not a convenience. Instead we will take our chances on repairing Karina. We accepted Progressive’s check for $3,480.

This is where owning a totaled car gets sticky. The moment Progressive cut us a check is the moment when we lost the original title to Karina. The state of California, like most states, revokes the original title on totaled vehicles to prevent damaged cars from being resold to unsuspecting buyers. The DMV will replace our original title with a Salvage Certificate. This becomes the new ownership document. Once we repair Karina, we can re-register her as “Revived Salvage.” She will never get a clean title again, but we will be able to resell her if we want to down the road.

Yes. The process of re-registering Karina will be inconvenient, but not $15,000 worth of inconvenience. This is what my next week’s action plan looks like:

Alas, the body shop will not be able to repair Karina until the New Year. This means that we will be back down to one car for the entire month of December.

Silver lining: We can use the $3,480 to pay down our debt challenge in the meantime.

Well, there are better ways to make money than getting double-tapped on the freeway, but I’ll take it.